Without Remorse
by Tom Clancy

Tom Clancy's Without Remorse is a film loosely based on the novel of the same name. It focuses on the origins of John Clark and will be followed up by the film, Rainbow Six. The film released on Amazon Prime Video on April 30, 2021.

In a war-torn region of Syria, a team of U.S. Navy SEALs led by Senior Chief John Kelly rescues a CIA operative taken hostage by Russian military forces. Three months later, in apparent retaliation for his role in the mission, the team is killed by Russian FSB operatives one by one. Kelly's pregnant wife Pam Kelly is murdered when the Russians break into their house. Despite being shot multiple times himself, Kelly manages to kill all but one of the attackers before being rushed to the hospital. Meanwhile, in Washington, D.C., Kelly's friend and former SEAL team member Lt. Commander Karen Greer meets with CIA officer Robert Ritter and Secretary of Defense Thomas Clay to discuss response options. Leaked news of Russia's unprecedented attack on American soil has caused the already-strained relations between the two nations to sour further. If something isn't done soon, the result could be a full-scale war.

Healed from his injuries, Kelly tracks down Andrej Vaseliev, a corrupt Russian diplomat who issued the passports to the FSB operatives, and forces him at gunpoint to give up the name of the surviving assassin. Sent to prison for the crime, Kelly bargains his way out by revealing the escaped operative is Victor Rykov, an ex-spetznaz officer who is currently hiding in Murmansk, Russia.

Kelly flies to Russia with Greer and a team of CIA operatives with the intent of preforming a HALO insertion of the coast. Their plane is intercepted by a Russian fighter and shot down over the ocean. Kelly, Greer, and the surviving team members make their way to Murmansk where they meet Ritter.

Kelly is suspicious of Ritter and blames him for the intel leaks. Ritter swears he was not behind them and they proceed with the mission. They locate Rykov in an apartment complex where Kelly goes rogue to kill Rykov instead of taking him alive as planned. Kelly confronts Rykov but is shocked to find Rykov wearing a suicide vest and claiming to be a deep cover CIA asset. Rykov denotates the vest, killing himself as the team becomes pinned down by heavy sniper fire. The team realizes that the mission was a setup and that they were supposed to be caught on Russian soil in order to start a war.

Kelly volunteers to stay behind and act as a distraction giving the team a chance to escape. Kelly fights the snipers and the responding police tactical team, managing to getaway by stealing a police uniform. Kelly, Greer, Ritter, and the surviving team members leave the country via boat.

With Clay's confession, Kelly drives the car over a bridge and lets it sink to the bottom of a river, drowning Clay. Kelly escapes from the car with help from Greer, who was waiting in the river with SCUBA gear. At a nearby train station, Greer gives Kelly a new identity provided by Ritter. With his new identity, he leaves to begin his life anew as John Clark.

In a mid-credits scene, Clark is seen talking to Ritter about creating a multinational counter-terrorism team, codenamed Rainbow.

The film's theatrical release was delayed multiple times as a result of the COVID-19 Pandemic. The film was originally scheduled to be released on September 18, 2020 but was delayed to October 2nd, 2020 due to the 2019–20 coronavirus pandemic. The film was later delayed again to February 26th, 2021 so that it would not compete with other films such as Wonder Woman 1984. In November 2020, the film was removed from Paramount Pictures' release schedule. Paramount sold the distrubution rights to Amazon Studios to release it digitally on Prime Video sometime 2021.[1][2] On February 8, 2021, the film was teased in an ad during Super Bowl LV, confirming its release date on Prime Video on April 30, 2021. 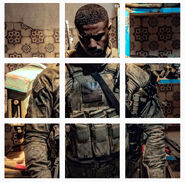 Behind the Scenes Stunt Work with Michael B. Jordan in 'Without Remorse'

Eyes on the Target - Burning Car - Without Remorse - Prime Video

Eyes on the Target - Prison Fight - Without Remorse - Prime Video