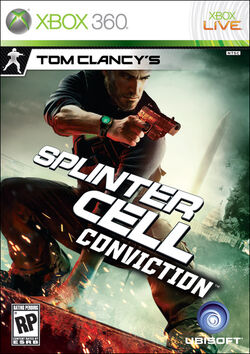 Man, I have never been more excited for a video game's release as I am for Conviction. I've had the game reserved from the kind folks at Gamestop since October but have been trying to stay away from information about the game up until recently. I'm an Xbox guy myself and lately they have been posting a lot of info on the game and for some reason I just can't seem to stay away. They got about a dozen video's in their marketplace from game video's, developers dairies, E3 trailers to an interview with my main man Micheal Ironside. On top of that they just released the demo for the game a while back and I can't stop playing it. It's just a short level but whenever I'm bored I just pop it on and play a different difficulty and try to figure out what I can do different than the time before.

The demo did worry me a bit however. One thing I hope they will fix when the game comes out is the fact that while in stealth mode (simply crouching), if one is to jump up on a ledge they begin to stand. I really hope they fix that so Fisher is able to continue his crouched position. Another thing I don't however think they will be changing is the overall speed of Fisher's movements. It almost seemed like no matter what I did, if I was standing, I was running. But it wasn't just the running aspect, it was almost like they wanted to bring the game speed up to the levels of...I don't know, something like Call of Duty or Battlefield. Even Rainbow Six: Vegas 2 didn't move at that many frames-per-second. Now, don't get me wrong, while that is something I can completely get used to...overall I LOVED the demo and still can't wait till the game comes out. In fact I've even made the decision to unplug the good old 360 and get the PS2 back up and running just to play Pandora Tomorrow and Chaos Theory one more time before the title's release, then if there's time, a couple missions from both the Gen. 6 and Gen. 7 versions of Double Agent.

Another thing I can't wait to check out is the new Spies Vs. Spies mode (which always makes me think of MadTV). Spies Vs. Mercs was ALWAYS fun, but I always wanted to be the spy and while working as a Merc I just thought about what I would do the next chance I got to be the spy...it is in fact a Splinter Cell title. All the other game modes look really great too, but I won't go too much into those now. The new Spy on Spy action does remind me of the versus mode for Resident Evil 5 a bit however. I just hope it doesn't play out the same. While there is the ability to take out other spies, there will also be enemy A.I. to worry about. I just can't wait to see how it will all work out and how other players will act in that situation, will everyone just go for each other or the A.I.?

I have seen a lot of changes made to this game over the last couple months and can't wait to see how it turns out. On top of that I'm really excited because not only did I grab the Collector's Edition, but I also pre-ordered it from Gamestop which means, special weapon. From what I can tell it's a silenced SPAS-12 that is just going to be for the people who ordered the game from Gamestop...but Gamestop has been known to just give people access to a weapon which will later be available to all people, which in the end doesn't bother me a bit, it's the new outfit that I will get specailly for the collector's edition purchase.

One last thing I just wanted to get off my chest was the new P.E.C. system their adding to the game as Ubisoft did with Vegas 2 as well. By completing certain tasks players will earn points which they can spend on upgrades for the weapons or person, from extra space for gadgets to a scope on their rifle...it's going to be AWESOME!

No matter how it turns out, there's no way a game pushed back this many times can be anything but greatness. Less than three weeks!