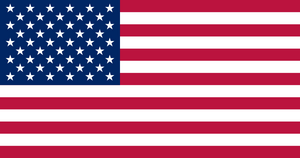 The United States of America is a constitutional federal republic comprising fifty states and a federal district. The country is situated mostly in central North America, where its forty-eight contiguous states and Washington, D.C., the capital district, lie between the Pacific and Atlantic Oceans, bordered by Canada to the north and Mexico to the south. The state of Alaska is in the northwest of the continent, with Canada to its east and Russia to the west across the Bering Strait, and the state of Hawaii is an archipelago in the mid-Pacific. The United States also possesses several territories, or insular areas, scattered around the Caribbean and Pacific.

The nation was founded by thirteen colonies of Great Britain located along the Atlantic seaboard. Proclaiming themselves "states," they issued the Declaration of Independence on July 4, 1776. The rebellious states defeated Great Britain in the American Revolutionary War, the first successful colonial war of independence. A federal convention adopted the current United States Constitution on September 17, 1787; its ratification the following year made the states part of a single republic. The Bill of Rights, comprising ten constitutional amendments, was ratified in 1791.

In the nineteenth century, the United States acquired land from France, Spain, the United Kingdom, Mexico, and Russia, and annexed the Republic of Texas and the Republic of Hawaii. Disputes between the agrarian South and industrial North over the expansion of the institution of slavery into western territories provoked the American Civil War of the 1860's. The North's victory prevented a permanent split of the country and led to the end of slavery in the United States. The Spanish-American War and World War I confirmed the nation's status as a military power.

In 1945, the United States emerged from World War II as the first country with nuclear weapons, a permanent member of the United Nations Security Council, and a founding member of NATO. In the post–Cold War era, the United States is the only remaining superpower—accounting for approximately 50% of global military spending—and the dominant economic, political, and cultural force in the world.

The United States of America has five military branches that appear in the Ryanverse: