The Hunt for Red October (Film)

View source
This is a common title. For other uses see, The Hunt for Red October (Disambig).

The Hunt for Red October

The Hunt for Red October
by Tom Clancy

The Hunt for Red October is a 1990 film based on the best-selling novel of the same name by Tom Clancy. It was directed by John McTiernan and stars Sean Connery as Captain Marko Ramius and Alec Baldwin as Jack Ryan. The film is followed by the 1992 film, Patriot Games.

It received mostly negative critical reviews from many major publications upon its theatrical release but was one of the top grossing movies of the year, grossing $122 million in North America and $200 million worldwide.

The year is 1984. Captain First Rank Marko Ramius is the commanding officer of Red October, a new Soviet submarine whose caterpillar drive renders it undetectable to sonar. Ramius leaves port to conduct exercises with the submarine V.K. Konovalov, commanded by his former student Captain Viktor Tupolev. Once at sea, Ramius murders political officer Ivan Putin, the only man aboard besides himself who knows the sub's true orders. Ramius then burns the orders and commands the crew to head toward America's east coast to conduct missile drills. The USS Dallas, an American submarine on patrol nearby, briefly detects Red October but loses contact once Ramius engages the silent drive.

The next morning, CIA analyst Jack Ryan briefs U.S. government officials on the departure of Red October and the threat it poses. Officials in the briefing, upon learning that the Soviet Navy has been deployed to sink Red October, fear Ramius may plan an unauthorized strike against the U.S., but Ryan believes Ramius plans to defect, and leaves for the North Atlantic to prove his theory before the U.S. Navy is ordered to sink Red October.

Red October's caterpillar drive fails at sea and sabotage is suspected. No longer silent, the sub comes under attack by Soviet forces and begins risky maneuvers through undersea canyons. Petty Officer Ronald Jones, a sonar technician aboard Dallas, plots an interception course. Ryan arranges a hazardous mid-ocean rendezvous to get aboard Dallas, where he attempts to persuade its captain, Commander Bart Mancuso, to contact Ramius and determine his intentions.

The Soviet Ambassador, who earlier claimed that Red October was lost at sea and requested US assistance in a rescue mission, at this point informs the US that the sub is a renegade and asks for US help to sink it. An order to do this is communicated to the US Fleet, including Dallas. Bart Mancuso is conflicted about whether he should sink Red October as ordered, but Ryan convinces him to make contact, offering to assist Ramius in his defection.

Ramius, stunned that the Americans correctly guessed his plan to defect, accepts their cooperation. He then stages a nuclear reactor emergency and orders the bulk of his crew to abandon ship, telling Red October's doctor Yevgeni Petrov that he and the other officers will scuttle the sub rather than let it be captured. Ramius submerges and Ryan, Mancuso and Jones come aboard via a rescue sub, at which point Ramius requests asylum in the United States for himself and his officers.

Thinking their mission is complete, Red October's skeleton crew are surprised by a torpedo attack from Konovalov, which has followed them across the Atlantic. As the two Soviet subs maneuver, Red October's cook (an undercover GRU agent) opens fire, fatally wounding Ramius's first officer, Vasily Borodin before retreating into the missile launch area. Ryan follows and guns down the saboteur just before he can detonate a missile and destroy the sub.

Meanwhile, with help from Dallas, Red October makes evasive maneuvers, causing Konovalov to be destroyed by one of its own torpedoes. The evacuated crew of Red October on board a U.S. Navy rescue ship witness this explosion and, not knowing that there is a second Soviet sub, assume it was Red October. Their subterfuge complete, Ryan and Ramius sail Red October to the Penobscot River in Maine.

Producer Mace Neufeld optioned Tom Clancy’s novel after reading the galley proofs in February 1985. Despite the book becoming a best seller, no Hollywood studio was interested because of its content. Neufeld said, “I read some of the reports from the other studios, and the story was too complicated to understand.” After one and half years, he finally got a high-level executive at Paramount Pictures to read Clancy’s novel and agree to develop it into a movie.

Screenwriters Larry Ferguson and Donald Stewart worked on the screenplay while Neufeld approached the United States Navy in order to get their approval. They were initially reluctant because of the fear that top secret information or technology might be revealed. However, several admirals were fans of Clancy’s book and reasoned that the film could do for submariners what Top Gun did for the Navy’s jet fighter pilots. Captain Michael Sherman, director of the Navy’s western regional information office in Los Angeles, suggested changes to the script that would present the Navy in a positive light.

The Navy gave the filmmakers unprecedented access to their submarines, allowing them to photograph unclassified sections of USS Chicago and USS Portsmouth to use in set and prop design. Key cast and crew members took rides in subs including Alec Baldwin and Scott Glenn taking an overnight trip on the USS Salt Lake City. Glenn, who played the commander of the USS Dallas, trained for his role by temporarily assuming the identity of a submarine captain on board the USS Houston (which portrayed the USS Dallas in most scenes). The sub's crew all took "orders" from Glenn, who was being prompted by the actual commanding officer. (Glenn does have military experience in real life, as a U.S. Marine.) Alec Baldwin also learned how to steer a Los Angeles-class submarine. Some of the extras portraying the Dallas crew were real-life U.S. Navy submariners, including the pilot of the DSRV, Lieutenant Commander George Billy, the actual commander of the DSRV. The actual submariners cast as extras came from submarines homeported in San Diego after it was determined that it was easier to hire real submariners rather than teach actors to how to "play" submariners. Crew members from the USS La Jolla, including Lt. Mark Draxton, took leave to participate in filming. According to an article about the filming in Sea Classics magazine, at least two sailors from the Atlantic Fleet-based Dallas took leave and participated in the Pacific Fleet-supported filming. The crew of the USS Houston called their month-long filming schedule the "Hunt for Red Ops." During this time the Houston made over 40 emergency surfacing "blows" for rehearsal and for the cameras.

Baldwin was approached to do the film in December 1988 but he was not told for what role. Austrian actor Klaus Maria Brandauer was cast as Soviet sub commander Marko Ramius but two weeks into filming he had to quit due to a prior commitment. The producers quickly faxed a copy of the script to Sean Connery who agreed to do it. He arrived in Los Angeles on a Friday and was supposed to start filming on Monday but he requested a day to rehearse and get into the role.

Estimates for the film’s budget ranged from $30 – 50 million with much of it going to the Navy for use of their equipment and personnel. The Navy had lent out the 360-foot long fast-attack USS Houston (which doubled for the USS Dallas), the USS Enterprise aircraft carrier, helicopters, two frigates, and a dry-dock crew.

Filming in actual submarines was deemed impractical and so five soundstages on the Paramount backlot were used. Two 50-foot square platforms housing mock-ups of the Red October and the USS Dallas were built, standing on top of hydraulic gimbals that simulated the sub’s movements. Connery recalled, “It was very claustrophobic. There were 62 people in a very confined space, 45 feet above the stage floor. It got very hot on the sets, and I’m also prone to sea sickness. The set would tilt to 45 degrees. Very disturbing.” The veteran actor shot for four weeks and the rest of the production shot for additional months on location in Port Angeles, Washington to the waters off Los Angeles.

To keep the audience oriented, each country's submarine had its own background color scheme: Soviet submarines, such as the Red October and Konovalov, had interiors done in black with silver trim. American ships, such as the Dallas and the aircraft carrier Enterprise, had gray interiors (although during one scene when the Dallas goes to alert status, it is flooded with red light).

Early filming was done aboard the USS Reuben James in the area of the Juan de Fuca Strait and Puget Sound in March 1989. The ship operated out of the Coast Guard Station at Port Angeles. The SH-60B detachment from the world famous Battlecats of HSL-43 operated out of NAS Whidbey Island, after being displaced by the filmcrew.

The film received mixed critical reviews from many major publications upon its theatrical release but was one of the top grossing movies of the year. The Washington Post’s Hal Hinson criticized the film in his review, commenting, “Nothing much happens, at least not onscreen ... There isn’t much to look at. When the action sequences finally come, the underwater images are murky and impossible to follow.” Vincent Canby in his review for the New York Times wrote, “Mr. McTiernan is not a subtle director. Punches are pulled constantly. The audience is told by word and soundtrack music when it should fear the worst, though the action on the screen gives the lie to such warnings.” Newsweek’s David Ansen wrote, “But it’s at the gut level that Red October disappoints. This smoother, impressively mounted machine is curiously ungripping. Like an overfilled kettle, it takes far too long to come to a boil.” Roger Ebert, however, called it "a skillful, efficient film that involves us in the clever and deceptive game being played." Nick Schager, for Slant magazine's review, notes, "The Hunt for Red October is a thrilling edge-of-your-seat trifle that has admirably withstood the test of time." Currently, the film has an 88% rating on Rotten Tomatoes. 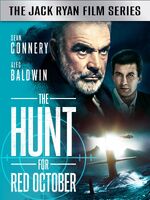