The Cardinal of the Kremlin

The Cardinal of the Kremlin

The Hunt for Red October

The Cardinal of the Kremlin is a novel written by Tom Clancy, featuring Jack Ryan. It is a sequel to The Hunt for Red October, based around the development of the Strategic Defense Initiative and its Soviet equivalent, covering themes including intelligence gathering and counterintelligence, political intrigue, and guerrilla warfare in Afghanistan.

The book begins at a diplomatic conference in Moscow attended by Jack Ryan, a rising CIA analyst and part of the American delegation to the Soviet Union. It is revealed that the CIA’s most highly-placed agent, codenamed CARDINAL, is none other than one Colonel Mikhail Filitov: the personal aide to the Soviet Minister of Defense and a national war hero. Filitov had won three Hero of the Soviet Union medals over the course of his career, most notably at the Battle of Stalingrad. He was recruited by GRU (Soviet Military Intelligence) Colonel Oleg Penkovsky, a British agent; he offered his services to the CIA after his wife and two sons died. The two sons died as a result of service in the Red Army, the youngest in a training accident, and the eldest during the Hungarian Uprising. As a result, Filitov began passing political, technical, and military intelligence for the CIA; This operation continued for over thirty years until the start of the book.

The American military discovers through "National Technical Means" that the Soviets were working on a ABM defense system—an equivalent to the U.S. Strategic Defense Initiative—based at Dushanbe in Tajikistan. Unbeknownst to most of the protagonists, the CIA has deployed a liaison, one Emilio Ortiz, to the region to aid the rebels. One Mujahideen groups leader, a man known only as "The Archer," is questioned about a strange light he witnessed (after a Soviet test of their weapon, which devastated an obsolete satellite). The Archer, noting the fear that the Americans have of the light in their questions, determines that the installation is a threat to him and his people, and tasks his group with attacking and pillaging the installation. In the end, the guerrillas partially succeed, destroying a large amount of equipment, though most of the scientific staff survive, and the Afghans suffer horrendous losses, including the death of The Archer.

Eventually, Filitov's identity is uncovered by the KGB, and he is subsequently arrested while attempting communication with his control officer, Mary Pat Foley. However, Ryan concocts a plan to secure the return of both Filitov and arrange the defection of the sitting KGB Chairman, Nikolay Borissovich Gerasimov. He schemes to go public with the defection and capture of Soviet submarine Red October, banking on the political instability of the Soviet Politburo. Filitov and Gerasimov are to be exfiltrated on the departing American delegation's aircraft, and Gerasimov's family is to be extracted from Estonia by John Clark onto the submarine Dallas, commanded by Captain Bart Mancuso.

As part of the extraction, Clark has Gerasimov’s wife and daughter board the submarine via a small Zodiac launch. As Dallas is leaving Soviet waters, a patrol frigate detects the submarine's presence. Luckily, Marko Ramius, the former captain of Red October, is aboard Dallas. He gets on the radio and declares that they are the special-operations submarine Novosibiirsk Komsomolets.

At this point, Ryan has successfully flipped Gerasimov, who has seen the writing on the wall, and fetches Filitov from his confinement using his power as the KGB Chairman. They then stop at Sheremetyevo Airport, awaiting the departure of the American delegation. Unfortunately, two security officers are clued into the operation: Klementi Vladimirovich Vatutin, a Colonel of the KGB's Second Chief Directorate and Sergey Nikolay´ch Golovko, an officer of the KGB’s First Chief Directorate (the “Foreign” Directorate). As the pair pursues Gerasimov and Filitov, Ryan falls from the aircraft to the tarmac, and is taken into custody by an enraged Golovko, who points an unloaded gun at Ryan's head. (This becomes a joke between the two in later novels). Ryan orders the plane to depart, banking on his diplomatic status to protect him from harm. Golovko then escorts Ryan to the private dacha of General Secretary Narmonov, where they discuss the CIA's interest in his political position and the CIA's interference in their internal security.

The novel ends with Ryan and several others (including the Defense Attaché from the Soviet Embassy) attending the funeral of Filitov, who died of heart complications and old age during his CIA debriefing period. 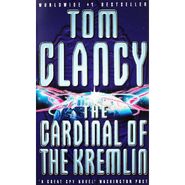