View source
For other versions of the character, see John Clark (Disambiguation).

"We served a country that didn't love us back. Because we believed in what it could be. We fought for what America could be. But they crossed a line. They brought their war into my house. They took my wife. And they took my baby girl before she got a chance to take a breath. That contract is broken. They're gonna play by my rules now. I'll show them what a pawn can do to a king."
— John Kelly

SCPO John Terrance Kelly, later known as John Clark, is a character that appears in the film Without Remorse as well as the upcoming film Rainbow Six.

John Kelly is a U.S. Navy SEAL. In a war-torn region of Syria in late 2018, Kelly led a SEAL Team to rescue a CIA operative taken hostage by ex-Russian military forces. Three months later, in apparent retaliation for his role in the mission, a squad of masked Russian assassin's attempted to kill Kelly in his home. Despite being shot multiple times himself, Kelly managed to kill all but one of the attackers before he was later rushed to the hospital. Unfortunately, Kelly's pregnant wife Pam Kelly was killed during the shootout. After healing from his injuries six months later, Kelly went rogue and tracked down Andrej Vaseliev, the corrupt Russian diplomat who issued the passports to his wife’s murderers. Kelly eliminates Vaseliev's security detail and forces him at gunpoint to give up the name of the surviving assassin. Sent to prison for the crime, Kelly bargains his way out by revealing the escaped operative is one Victor Rykov, an ex-Special Forces officer who is currently hiding in Murmansk, Russia.

Kelly flies to Russia with Greer and a CIA black ops team with the intent of performing a HALO insertion off the Russian coast. Their plane is intercepted by a Russian fighter and shot down into the Barents Sea. Kelly, Greer, and the surviving team members make their way to Murmansk by zodiac where they meet Ritter.

Kelly is suspicious of Ritter and blames him for the intelligence leaks but Ritter swears he is not the one responsible, so they proceed with the mission. They locate Rykov in an apartment complex where Kelly goes off mission to kill Rykov instead of taking him alive as planned. When Kelly confronts Rykov, he discovers that he is wearing a suicide vest and is claiming to be a deep cover CIA asset. Rykov detonates the vest, killing himself as the team becomes pinned down by heavy sniper fire. The team realizes that the mission was a setup and that they were supposed to be caught on Russian soil in order to start a war.

Kelly volunteers to stay behind and act as a distraction giving the team a chance to escape. Kelly fights the snipers and the responding police tactical team, managing to get away by stealing a police uniform and hijacking an ambulance. Kelly, Greer, Ritter, and the surviving team members leave the country via boat.

With Clay's confession, Kelly drives the car over a bridge and lets it sink to the bottom of a river, drowning Clay. Kelly escapes from the car with help from Greer, who was waiting in the river with SCUBA gear. At Washington Union Station, Greer gives Kelly a new identity provided by Ritter. With his new identity, he leaves to begin his life anew as John Clark.

A year later in 2020, Kelly returned and met up with Ritter who had recently been promoted to Deputy Director of the CIA. During their brief meeting, Clark proposed his idea for a new international counter-terrorist unit known as Rainbow. 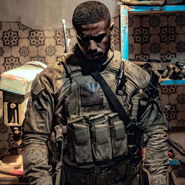