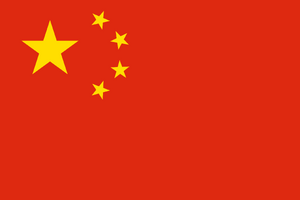 China (Chinese: 中国 Zhōngguó), officially known as the People's Republic of China (PRC) (Chinese: 中华人民共和国 Zhōnghuá Rénmín Gònghéguó), is a large country occupying most of East Asia and its Pacific Coast. The PRC is a single-party state governed by the Communist Party, with its seat of government in the capital city of Beijing.

The country plays a prominent role in the Ryanverse.