"Okay. I'll give you a name. John Kelly. You are the problem, John. You're supposed to be dead, so wherever you go, death will follow."
— Andre Vaseliev to John Kelly

Andre Vaseliev is a character that appears in the film, Without Remorse.

Vadeliev is a former member of the FSB who later became a Russian diplomat in the United States. In 2019, Vadeliev was a conspirator in Secretary of Defense Thomas Clay's plan to boost the economies of Russia and the United States by starting a war between them. Following an attack Navy SEALs on a Russian arms depot in Russia that killed Yuri Zelin, the son of FSB head Nikolay Zelin, Vadeliev issued passports to an FSB team to assassinate the SEAL team members with the intent of them being discovered to increase tensions between Russia and the United States. This resulted in the deaths of Rowdy King and Keith Webb. It also gravely injured John Kelly and led to the death of his wife Pam Kelly and unborn child. Despite this, Kelly killed all members of the FSB team except Viktor Rykov who escaped.

The CIA later determined that retaliating against the FSB was not it worth the trouble and considered the matter closed. While the CIA knew of Vadeliev's involvement, they could not question him due to his diplomatic immunity. This caused Kelly to take it upon himself to track Vadeliev down in order to learn Rykov's name. After Vadeliev left his office to go Dulles International Airport, Kelly followed him in a stolen tow truck and called the police on Vadeliev's driver to slow them down. After police left, Kelly rammed Vadeliev vehicle as it arrived at the airport, trapping it. Kelly then doused Vadeliev's car in gasoline, set it on fire, and entered the vehicle. After killing Vadeliev's driver, Kelly demanded to know Rykov's name. Vadeliev initially refused but was shot by Kelly in the leg. After mocking Kelly and refusing again, Vadeliev was shot in the lung. He then told him Rykov's name after Kelly promised to kill him quickly. Afterwards, Vadeliev was killed from a shot to the head. 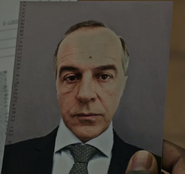